Mindful May: Show Some Compassion … to Yourself

In honor of Mindful May, Bright Outlook has invited Kim Douglass, Founder of Common Humanity, Center for Mindfulness in Berlin, as our guest blogger.

What is self-compassion, and why should you adopt it? Read on for the details!

Preparing for a challenge is definitely preferable to the alternative. You wouldn’t want to get into a space shuttle if you knew that the engineers working on the mission hadn’t checked their calculations more than once. You wouldn’t want to live in a house that you knew was built by someone with no knowledge of construction and structural principles. File those things under “O” for obvious.

However, at some point during your academic journey, you may have decided that an effective motivational tactic during your preparation was to talk to yourself in a way that you would never talk to another living being. You decided that berating yourself, cutting yourself down and speaking to yourself with total disrespect was going to lead to the outcomes you wanted: perhaps more accuracy on a test, better grades, or more recognition at school or work.

But multiple studies show that this sort of behavior does not produce the results we’ve been led to believe.
Negative self-talk can be an extreme stressor. When you talk to yourself harshly:

The antidote to negative self-talk is self-compassion. If you don’t know what self-compassion is, you’re not alone; it’s a relatively new area of study.

Compassion seeks to alleviate suffering and brings understanding to the situation. Think of how you would act towards a good friend who was having a tough time. Imagine they had taken a practice exam and didn’t do well. I would bet that your first reaction wouldn’t be, “Wow. How could you have gotten such a low score? What were you thinking? You’re never getting into a decent school. What an idiot!”

Why not turn that compassion on yourself? There is a lot of evidence to back me when I tell you that treating yourself as your own best friend will serve you better in the long run.

Kristin Neff, Ph.D., is the leading expert on self-compassion and has this to say:

Instead of just ignoring your pain with a ‘stiff upper lip’ mentality, you stop to tell yourself, ‘This is really difficult right now… How can I comfort and care for myself in this moment?’
Instead of mercilessly judging and criticizing yourself for various inadequacies or shortcomings, self-compassion means you are kind and understanding when confronted with personal failings – after all, whoever said you were supposed to be perfect? Perhaps most importantly, having compassion for yourself means that you honor and accept your humanness. Things will not always go the way you want them to. You will encounter frustrations, losses will occur, you will make mistakes, bump up against your limitations, fall short of your ideals. This is the human condition, a reality shared by all of us. 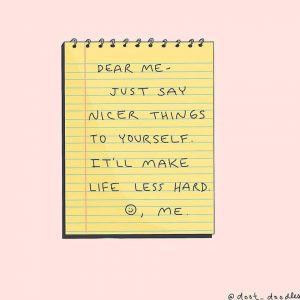 Try talking to yourself with positivity.  When you catch yourself being harsh and critical towards yourself, change the dialogue.

Consider how you would feel if a friend or a parent was talking to you in an unproductive way, and telling you those things you may be telling yourself: You’re not good enough. If only you would work harder. If you don’t get into a great school, your future will be meaningless.

You might be initially motivated by this blistering speech to prove that you can do better or to escape harsh criticism. However, in the long run, you will probably decide that you will never be able to live up to those expectations, that their criticism is too frightening to face, and give up.

Negative self-talk sabotages our success. By continually being overly critical, you are just putting whipped cream and a cherry on top of the stress of everyday living, and life is hard enough as it is. Also, you’re putting a strain on your physical and mental health.

Dan Harris, author of the book “10% Happier” says (and I’m paraphrasing):  People that practice self-compassion do a lot better in life because when they make a mistake, they can bounce back from it. Learn from your mistakes; don’t beat yourself up for them.

It may not be intuitive to be self-compassionate, but when you catch yourself being hyper-critical, become aware of it, and remember your humanness. Think about how you would address a friend in a similar situation, and give yourself the same benefit of compassion and respect. Like Kristin Neff said, “Whoever said you were supposed to be perfect?” 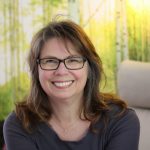 Common Humanity, Center for Mindfulness has been a source in and around Berlin for Mindfulness Based Stress Reduction (MBSR) classes, short retreats, workshops, and meditation groups in English since 2018. Kim’s vision is to build a mindful community. She strives to reassure everyone she meets that we have much more in common than we might think and that we are never, ever alone. There is always someone out there that would understand and help, no matter how grave our situation may seem. 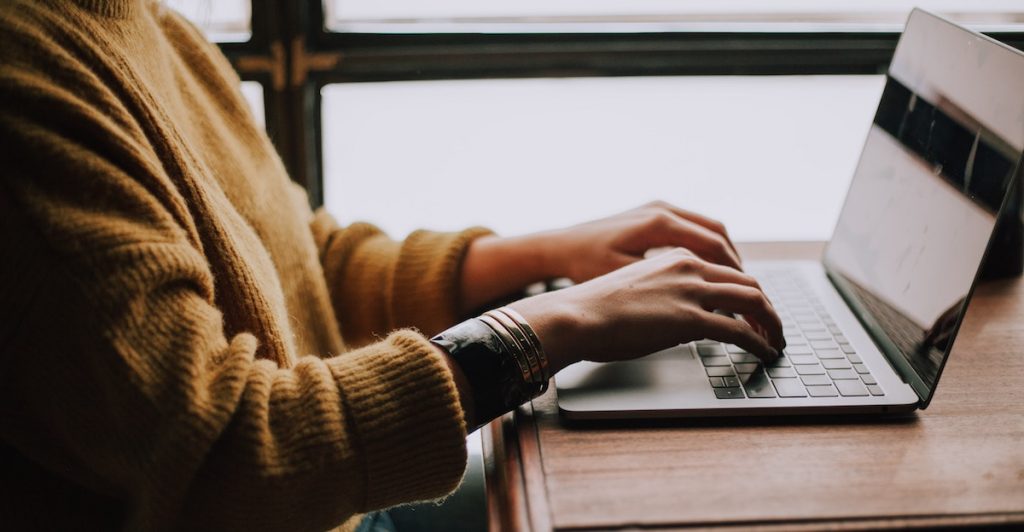 Should I cancel my GMAT score?

Should you cancel a 590 GMAT Score? How will schools judge lower scores? Learn how to make the best decision for your situation.

Breathing exercises can be a quick, portable, and effective way to manage anxiety when you’re in a testing situation.